Learning part of Shared Services, what? 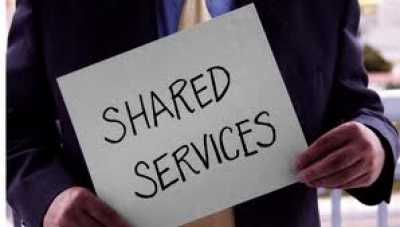 Hang on a minute. Surely learning is one of the most complex and least well understood things people do. So let’s put it in an offshore call centre. Is that what you’re saying?

Not really. It’s true that Shared Service Centres (SSC’s) typically provide routine, often back-office, services required by the rest of an organisation - payroll and accounts payable being classic examples. The fundamental challenge of an SSC is to devise the simplest set of processes and technology to do the most amount of work to the greater benefit of the most amount of customers. It’s a simple idea: instead of having similar things done in different ways in different parts of an organisation (where the variation is often needless and costs a lot of money), better to collect it all together, get it as slick, streamlined and scalable as you can, put a load of volume through it, continuously monitor customer satisfaction, adapt accordingly and the promise is improved quality, consistency and shared best practice, all at reduced cost.

Already big in Financial Services, SSC’s are springing up everywhere - in smaller companies as well as bigger ones, in large Government Departments and in local authorities. Not unpredictably we’ve seen some SSC’s start up in the UK, some move offshore and some come back again.

More interesting though, is the way in which the nature and scope of the work is developing. Some SSC’s are doing more work which, in the jargon, is inherently less "transactable". Put simply, if you can describe a job using one or more flowcharts and use these to build systems to process jobs successfully and reliably – or failing that to leave the job and everything else unchanged – then you have a transactable process. A delegate using a booking system to self-serve onto a stand-up training course should be a transactable process; expecting to become a better manager by reading Sun Tzu’s The Art of War probably isn’t.

So, if transactability were the only criterion, learning in the broadest sense would probably be one of the last things you might consider putting in an SSC. But SSC’s aren’t just about the highly efficient processing of huge volumes of simple transactable things. Increasingly they are being used as centres of excellence where best practice is shared across the enterprise and where the emphasis is as much on effectiveness as it is on efficiency. Since less deterministic work is carried out in SSC’s these days - including legals and HR case work - then why not e-learning too? After all, SSC’s tend to make great use of contact centre technology, ERP systems and intranets, all of which can be massively useful to us in learning and development.

Getting an LMS to cooperate with your talent and/or performance management systems is one way to better align L&D with the needs of your business. Another huge motivator is that SSC’s often have one single database to hold people’s HR and pay records, so if you can make training records part of that single database, that will enable far better decision making around L&D spend thereafter - if you have everyone’s records in one place and you know how to query them, you stand a much better chance of working out who’s doing what, how much it’s costing and what business benefit it’s delivering.

Centralisation needn’t necessarily disempower colleagues working in the field. With care, you can have the best of both worlds. The trick is to differentiate between, on the one hand, the variation that genuinely adds value and on the other, the variation which is costing the business for no good reason. On the admin side of things, LMSs can be configured to allow more or less control away from centre. Content-wise, (centralised) web-based publishing systems can be used all over the enterprise, with local participants having more or less control over the process. With the most flexible systems it’s up to you to decide how you want to configure them.

Assuming there isn’t too much variation between what different audiences in the field want and need (in which case localisation of language, content and/or culture would be required), one might imagine a centralised e-learning function whose job it is to design, build, rollout, support, evaluate and eventually withdraw whole suites of e-learning and testing programmes. They do the job "soup to nuts", and because the same people do everything the same way, you get economies of scale and greater consistency. This is classic SSC practice and can work really well if these people are recognised as being the best at what they do, get their processes beautifully slick and can supply against business demand at agreed levels of quality. It’s not exactly transactable but it’s an end to end service.

But what about the "democratisation of learning", Web 2.0 and self-help? How does that fit in?

The democratisation of learning, Web 2.0 or E-learning 3.0 – or whatever you want to call it - is great so long as it doesn’t descend into expensive chaos. On the face of it, the democratisation of learning looks at odds with the SSC concept – but it isn’t: an SSC-like body is a way of harnessing the knowledge and skills from the coalface but in such a way that it’s more readily learnable by colleagues and ensuring money isn’t wasted.

Not everything is always rosy in SSC gardens, admittedly. Problems can occur when either customer demand outstrips SSC supply, when wrong assumptions have been made and/or when the processes and people aren’t all they’re cracked up to be. SSC’s are not without risk but these are usually considered to be worth taking when stacked up against the huge savings SSC’s promise.

Two things. Some SSC’s have expertise in improvement method such as Six Sigma, LEAN, time and motion and so on, all of which can be leveraged for your e-learning initiatives, both directly and indirectly: directly, because, for example, LEAN, with its emphasis on smooth and steady flow, customer pull and the elimination of waste, has a lot to teach us about how best to organise the design and build of content and testing; indirectly, because, for example, Six Sigma uses statistical testing to help identify and fix defects (or variation) so a "black belt" should be able to help you assess whether training made a difference, using control groups and statistical testing, work out the relative contribution of each of a number of different variables’ contribution to your customers’ overall satisfaction levels, and so on. This kind of expertise can often be hard to access so, if you have a SSC, find out whose brains you can pick.

More generally, another plus point about SSC’s is that they tend to contain people who love looking at spreadsheets. We can learn a lot from them. Now more than ever we have to justify the money we spend on learning so business performance management which plays a big part in most SSC’s – in the shape of balanced scorecards, service level agreements, competitive benchmarking, resource planning, and so on – can really help.

To centralise or not to centralise is intricately bound up in technological, political, and financial issues so it may not always be possible to put all your learning eggs in one central basket. But there may still be benefits to centralising at least some of the operation. The industry is becoming increasingly sold on the benefits of standards and templates so it would be natural for an SSC-like body to control these. In such a scenario, the learning professionals offer best practice advice, require their federated learning functions to use their approved tools and techniques to try to ensure that the organisation as a whole gets as much value out of the time and money its people spend learning. Which has got to be good for all of us.