Time for a spring clean Featured 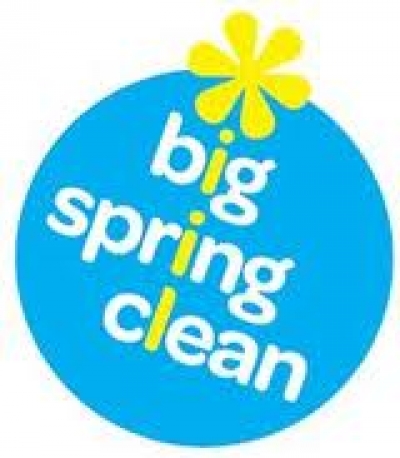 Regardless of sector, those of us working client-side in L&D will have been grappling with the "more with less" challenge for some time now. Some of us will have been involved in "spend to save" initiatives around business re-engineering, automation, lean management and so on. But how seriously have we considered doing "less with less – but better"?

In large and complex organisations that comprise a number of different businesses, the chances are that learning resources will be duplicated across business lines; there’s also every chance that individual businesses are doing more than they need to. One of the great things about working in our field is that learning professionals are almost invariably super-passionate about what they do so it’s entirely natural that on a personal level they’ll want to do more of it. But on a professional level we need to keep that enthusiasm in business check and think more about cost benefit. Against a back drop of economic uncertainty and heightened challenges around accountability, sometimes less can be more. "Less with less" isn’t the most spectacular of prospects but "less with less – but better" may help cheer us up a bit.

Portfolio rationalisation has been around a long time. Lots of IT people got into it in the late 90’s when they were worried about what mischief the Y2K bug might cause them. This turned out to be something of a damp squib but the guys were still rewarded with lots of new efficiencies thanks to their efforts. Elsewhere product managers know that new launches have to be counter-balanced with withdrawals otherwise costs get out of hand, service levels drop and/or the customer becomes confused. Having too much stuff is as bad as not having enough. In theory, rationalising a portfolio of learning offerings should be a relatively quick win. It’s not hugely bound up with technology. Neither is it contingent on huge amount of business re-engineering. But it is the stuff of change so the practice will probably turn out to be trickier than the theory.

By the way, have you noticed how the verb "own" has relatively recently started to be used as an imperative in advertising language, as in "Own it now on DVD!"? We’re constantly being reminded that we need to buy stuff, not borrow it, not lend it, not make do with second best, we need to have our own version of it and it has to be new. Forget the 80 / 20 rule; we 100% need it. Without it our lives are incomplete.

Reduce, re-use and recycle is an antidote that struggles against this but it’s worth thinking about in the learning context. As learning professionals, we’re a pretty high-minded bunch of people on the whole – we have our end-users’ self-actualisation top of mind, don’t we? – but we can often be quite possessive about our learning assets. The planet would like us to think twice about our rushing out and buying that new massive plasma telly but our first impulse is to go ahead, forgetting that the old one still works or could be fixed, or actually whether we even want, never mind need, a new one. We might consider letting other people watch our telly but not too often and only then if we can keep on hands on the remote. On occasion isn’t the same a little bit true of L&D too?

Anyway, back to rationalisation. Notwithstanding what I just said about theory and practice and in true Blue Peter style here’s one I did earlier. Think of this as being a vanilla you’ll inevitably have to flavour to better match the needs and situation of your organisation. You’ll be able to pick holes in the methodology but it’s the spirit of the thing that’s more important.

1) First of all, score each course according to how much it adds to the very essence of business, particularly with regard to its mission, vision and strategy. Try not to take too much time doing this as you could easily get bogged down in analysis paralysis. Get a few people together to thrash out the subjective variation but concentrate on getting it directionally correct. Use a 10 point scale, decimal points are not allowed. This is a basic measure of value.

2) The second step is to score each course according to how business-specific it is (where a low score signifies generic applicability and a high score signifies something which is special to the innermost workings of the business). This is a basic measure of uniqueness, except on a 10 point scale. OK, so unique is a binary thing but you know what I mean.

Now, it’s natural for L&D practitioners to think that their (customers’) needs and situation are unique, special or different, in the same way that everyone’s project is more important than everyone else’s, so this time consider a more objective means of doing your assessment. Again, this will be easier said than done but try something along the following lines:

Let x be the number of separate businesses in your organisation, each carrying out its own L&D activity

Collect together the x different lists of offerings

For each offering in each list, let y be the number of times it - or something similar (aye, there's the rub) - appears in all the different lists

Thus we would expect courses designed to help everyone across an organisation to discharge their responsibilities (e.g. Health & Safety or Data Protection) to score low whereas something very "operational" and special to a particular line of business (e.g. How to Fix Vertical Helicons Just-in-Time) we would expect to score high. Plotting offerings along the two different dimensions gives us a classic 2 x 2 matrix.

3) With any luck this might be telling you a few things already. Now consider adding in a third dimension so that the scattergram becomes a bubble chart where the size of the bubbles shows the relative cost of the different offerings.

Cost is a tricky one to model as it’s a function of different kinds of activity so it’s important that you compare apples with apples. In a stand-up training scenario, for example, you might decide that bubble size should be a function of development, delivery (more variable) and administration (more fixed) costs. The relative length of different courses needs to be borne in mind so you might consider running two separate analyses, one that shows absolute costs and another normalised for course length (i.e. "cost per course day delivered", as a unit of production, as it were). Again, sometimes it’s the compare and contrast which will yield significant insights.

4) Having just made appeal to your environmental sensibilities, let me now completely blow it by asking you to do loads of colour printing, which is the simplest way I can think of to represent the fourth dimension, benefit. We’re in Holy Grail territory here so keep it simple and forget about decimal points. How about the following?: 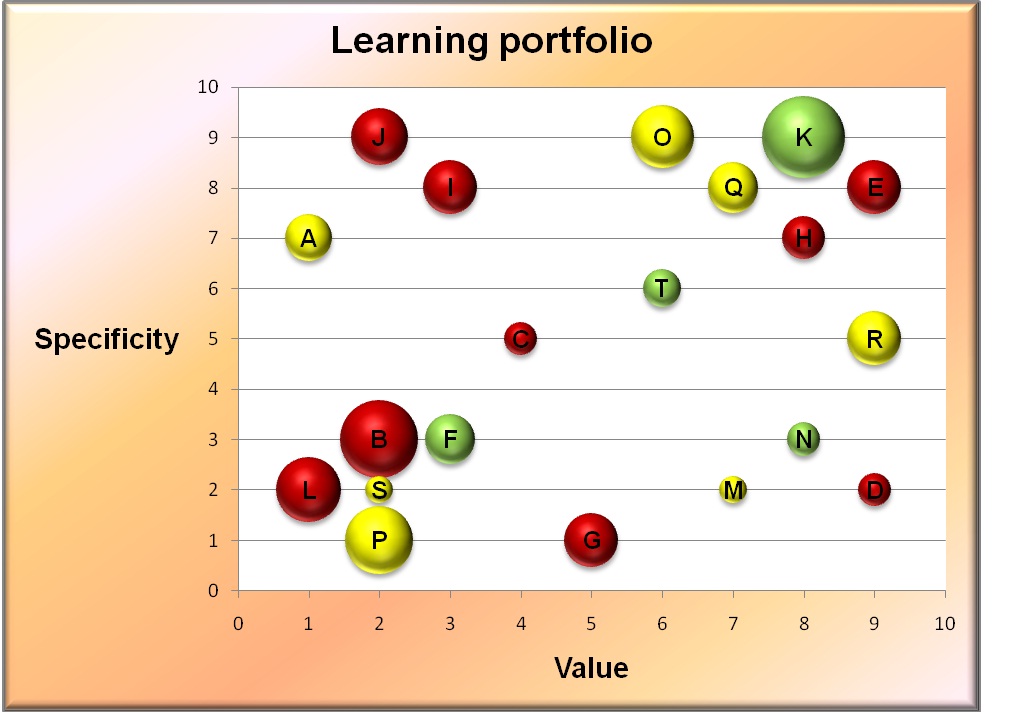 Offerings in the upper right quadrant are candidates for Investment. These are probably the riskiest and should be protected and possibly grown. Reassuringly, the most costly offering, K, scores high on both axes and looks like it’s showing good returns. But can anything be done to re-energise H and E?

Reduce items, upper left, are candidates for de-prioritisation. Are they really adding differentiated value to the business bottom line or are they nice-to-have’s? Are any of them distractions, taking your and your end-users’ eyes off the real business ball? Are they stopping you from investing in the core stuff? J & I look as if they’re costing quite a lot of money, aren’t hugely accountable and are quite specific. Do less or stop them altogether

Re-use / re-cycle items, bottom right, have wider applicability. Can you find new audiences for any existing material? Re-usable as is? Or can content be quickly and cheaply re-purposed? N looks interesting: relatively cheap, strategically high and showing demonstrable returns. Are there other people elsewhere in the organisation you can start a recycling swap shop with?

Consider dumping any generic low value stuff that’s cluttering up your portfolio, bottom left. B & L in particular you should think about taking to your nearest landfill site

You will need to watch out for some political shenanigans, though. Inevitably, people will manipulate criteria, data interpretation will be "selective", new obfuscating strategic issues will surface, there’ll be lobbying, factions will emerge etc., so there will be need to be a degree of centralist control, objective setting, question answering, auditing and so on - but much of the analysis and evaluation will need to be federated to the people who understand their business best; it’s a nice balance you have to strike. As I say, the theory’s easier than the practice.

But if you can overcome these challenges, spring cleaning can have a pretty big upside: the chintz is chucked out leaving you more time to polish and show off the good stuff. Visitors will notice that your house is much tidier and there is less – but more - to appreciate. And for you there’s also a good deal less upkeep.